The Way to Harmony


THE WAY TO HARMONY 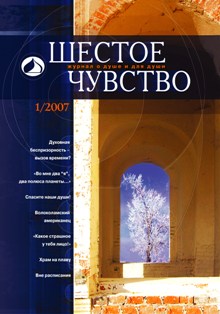 The magazine sees itself as a popular, cultural, educational and socially-focused edition.  The collective of the magazine intends to promote formation of  healthy, steady and well-balanced human person.

The title of the magazine is “Sixth Sense”. This sense reflects spiritual foundation of human life, occurrence into immense world of his soul, in the world of invisible laws of its life, sources of formation of its moral.

The magazine is for a wide range of readers who have not found yet the point of prop in their private world and who are in more or less active state of its search.

The edition starts with a recognition of the fact, that the modern person, as a rule, has no internal spiritual integrity. His cogitative activity experiences painful moral crisis. More and more often people’s mood does not come out of the state of lasting disappointments, exasperation, alarms and depressions. Moreover, this is a general growing sense of aimlessness of existence.

These oppressive states do not depend on what position in society you occupy and how much money you earn – two hundred dollars or hundred thousand a month. Only internal character problems cause misbalance and upset of the soul.

You may seem lucky - as it happens, for example, to actors or stars – and only a few knows, what painful dissonance you undergo in your soul and how many times a day you are on the verge of nervous breakdown and spiritual disaster. Roots of all ailments and soul diseases, in the same of soul worries for past and present things. What is more, it is the set of some hereditary  factors and habits, worked out with years, and generated predilection, what maybe any kind of leisure activities, that does not have sensible feeling and lead to oversurplus in any sphere of activity or emotions. For example, when thrift turns into avarice, aesthetic feeling of the beauty falls down to the level of disgusting orgies, aspiration to an extent grows into a complex of authority, etc.

Thousands of thousands anomalies and deviations from accepted natural behavioural limits gradually lead people to the state of crisis. The person can be hidden from the internal torture nowhere – neither in a hut, nor in a palace. Therefore, the task of his internal recovery consists not of distraction on chimeras of the external reasons, but of setting an eye on soul – and admitting, at last, to himself the truth, that he is sick and his disease is extremely neglected.

The reason for this painful ailment in a present person is in the absence of organized and constant internal work on himself, essential reassessment of himself, with deficiency of really useful spiritual recommendations creating our internal world. Mystic-spiritual eclecticism dominating in the world  undoubtedly relates to the factors aggravating misbalance in a society.  An amplifying despotism of material-capitalist way of life, that reduces the importance of any moral efforts of the person, if they don’t make profit, adds oil to the fire.

The magazine is supposed to reveal reasons, preventing the person from leading the entire manner of life, and find out ways of gradually overcoming, based on traditional Russian spirituality and  using, with the help of thought out and experientially worked psychological technique, reserved opportunities of the human organism given by God. The magazine will have a conversation about various tested ways of moral transformation of the person and the restriction of its egocentrism.

Sympathies of the magazine are on the side of checked up by time Christian principles of creation of the human person, to which the magazine will pay special attention, taking into account the fact of their thousand-year practice in Russian history. The great principle of love professed by Christianity and distributed equally on all people of the world is especially close to the edition. It is central for Russian culture. The content of magazine « Sixth Sense» is based on love and compassion to a distress of the present person. 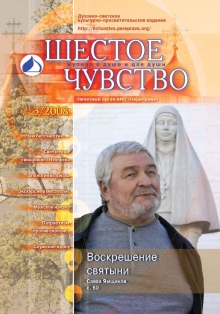 The actuality of the edition is connected with the fact that the magazine wants to bring a mite into common concern in pacification of public morals and in formation of kind human feelings of citizens to each other. It appeals not to violence, revolutions, hatred and wars, but to the vision of internal structure, its main defects, excruciating diseases, contradictions and imperfections – to correct first of all ourselves, instead of others. Not barricades, not cobble-stones of proletariat and not sharpeners, but only own fair internal struggle against that artificial egocentric person, who was raised in us by modern consumable civilization and our own negative predilections –that is what we need today. It is necessary to conquer something that blinds and paralyses person’s will from inside, that forces him to work only to satisfy his tight "ego", instead of positive changing of himself and helping people near him.

We are based on the best traditions and achievements of mankind (and first of all spiritual experience of Russia) in the sphere of work on soul –and we are not going to invent bicycle. Reasonable synthesis of achieved and the combination of  sensible theory with practice, as we hope, will give positive results. Indeed, there is already nothing new in the world. All essential, that was possible to say about soul, was already said. But it often happens, that the most important remarks, offers and conclusions remain outside attention of the person immersed in his "ego". He just prefers not to hear something he doesn’t want to.

Our aim is to bring up to the reader at least a particle of really sensible reasoning about soul.

The society is tired of cruelty, stresses, disappointments and depressions. It is craving for constructive alternatives.

The magazine will help readers to choose a way of leading to the harmony with conscience, to freedom, to the world and active love.